This past week, the students of Room 11 have been blessed to work with Mr. Helmhout.  Mr. Helmhout is a student teacher from AUT and he will be with us for for the next four weeks. 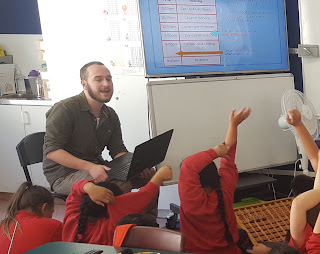 Today the amazing students in Room 11 Maths spent some time after lunch with Mrs. Clarke learning about putting forth our best efforts in order to be the most successful person we can be.  Mrs. Clarke told us that we need to be sure to make good choices.

Mrs. Clarke introduced us to Wynton Rufer, an amazing NZ soccer player, who wanted to date a young lady named Lisa.  Lisa was a Christian and told Wynton that she would not go out with him because he was not making the best choices in his life.  This made Wynton change his ways, and he later became a follower of Jesus.  Lisa gave him another chance and the two are now happily married.
Wynton created a WYNRS academy that trains world class soccer players and world class citizens.

Mrs. Clarke showed us a video of Mr. Rufer persevering to keep a soccer ball off the ground and we were able to try it ourselves using a balloon.  Mr. Rufer is now the coach of the PNG soccer team and he wants his team to be good role models both on the field and off.

This term, the students at Pt. England School will be studying "The Guardians of the Galaxy."  The amazing students of Team 3 are going to be learning about why we have time and the seasons, as well as the awesome things happening in Space.

The teachers of Team 3 created a movie for the assembly showing "The Days of our Lives."

We are an amazing group of Year 3/4 students at Pt. England Primary School in Auckland, New Zealand. We work hard everyday to LEARN and CREATE so we can SHARE on our class and individual blogs!